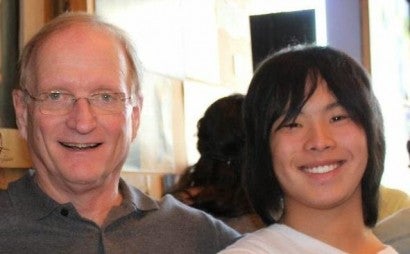 It seems every year about this time my son, Andrew, becomes the subject of this blog. Andrew is now 19 years old, a high school graduate, and he also happens to be a person with a disability – he is missing his left arm.

Two years ago I wrote about helping Andrew prepare for his senior year and some of the things that lay ahead of him in the world of services for individuals with disabilities. Step one was making application to the Division of Vocational Rehabilitation (DVR). I described my experience telling him about this federally-funded program that assists individuals with disabilities in determining their career and then offering training and placement to make their vocational dream a reality. At the time, his immediate response was that he was proud and didn’t need any handout. I think his exact words were “I don’t need no stinkin’ handout”. He was incredulous with the thought that throughout his whole life he had fought to not make his disability a way to gain advantage or favor and now his Dad was suggesting he take something for free.

By last year I was able to report he had accepted the services offered by DVR. Andrew began to work with DVR and had positive experiences with his counselor going through an individual orientation. I had also found a letter in our house from DVR indicating he was eligible for services and instructing Andrew to make an appointment again to begin writing the plan. He was nonplussed about receiving the letter. And anyway getting the letter and making the appointment would have to wait until after the prom which prom came first in his life!

Well, finally Andrew has a DVR plan! It has Andrew scheduled to attend SPSCC this spring. This has been a long and frustrating experience as a parent. It’s important to encourage yet not be too pushy or too frustrated by his lack of initiative and follow-through – Yikes – an 8 month delay! But now he is about to begin his schooling which will lead to the job he has always dreamed of – becoming a Chef. We’ll see how it goes. Oh, by the way, he also got a part-time job with assistance from Morningside! [Paid for by, you guessed it, Dad!]