McCleary Decision and the Budget Dilemma 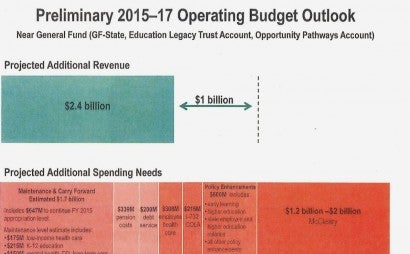 Last week the State of Washington Supreme Court held the Washington State Legislature in contempt of court for not following their decision to fund public education to the degree established in our state constitution.  The Legislature has until 2015 to come to a resolution – “On the date following adjournment of the 2015 session, if the State has not complied with the court’s order, the State shall file in the court a memorandum explaining why sanctions or other remedial measures should not be imposed,” reads the order, which was signed by Chief Justice Barbara Madsen. The decision was unanimous.”  Seattle Times, Joseph O’Sullivan 9/17/2014.

Since it seems the problems cannot be swept under the rug any more, I think we are in for some interesting times.
So what is happening in state government?   In June DSHS Secretary Kevin Quigley sent, in part, the following invitation to stakeholders:
“Dear Stakeholder:
I would like to invite you to join us at the DSHS Human Services Building (OB-2)     Auditorium in Olympia Washington at 11:00 on June 17, 2014 for a discussion of the budget process for the upcoming biennium.  Although the start of the 2015-17 biennium on July 1, 2015 is still more than a year away, steps toward creating that next biennial budget start early.
Attached you will find a couple of graphs from a presentation provided by the Washington State Office of Financial Management (OFM) Director, David Schumacher, to the Governor’s cabinet.  What is immediately apparent from the first slide is that there is a large gap between the costs to maintain current services for our expanding     populations and our projected revenues.  Even if we add $1 billion in revenues, beyond the annual revenue growth, the funding gap is between an additional $1.2 and $2 billion to fund the McCleary lawsuit.
Within the DSHS cabinet we are unanimous in our opposition to reductions in funding for social services.  The unmet needs are simply too great.  Nonetheless, we will be required to engage in a budget prioritization process so I want you to have the earliest possible notice and to discuss with you our plan of approach.
Because we do not favor reduction packages we will be seeking to submit a rank    ordering of our programs and the scope of our programs.  The challenge for us will, of course, be to rank them.  Ranks will be established against DSHS Activities Inventories to be found at http://www.dshs.wa.gov/budget/2015-17prioritization.shtml .
As we progress through this process we will be applying several ground rules:
1.Reach out to staff and stakeholders for input (we might not have time to develop a formal process based on our rushed timeline so stakeholders will need to be proactive and actively pass their prioritizations to the respective administration(s));”…
(emphasis added)      A graph that he shared that depicts the issue is below
During this meeting I pointed out to Secretary Quigley the tremendous loss of federal revenue if state match dollars were cut in programs serving individuals with disabilities.  During this meeting he called on stakeholders to help with budget prioritizing.  To begin that process I went to the web site.  After reviewing the information I don’t understand the priorities.  The priority ranking is not delineated.  I see that Community Employment Programs are on the top of the list and I would like to think that means these services have a high priority.  But my initial reaction, based on 40 years of experience, is that this ranking really means that programs serving individuals with developmental disabilities in the community will be the first to go.  I believe the same may be true for other community programs serving vulnerable populations – Mental health, Children, Family support as they are on the top of the list as well.  The problem is that after 8 years of budget cuts, and increasing need due to the economic recession, community programs are suffering.  There is simply no room for further erosion and still be able to provide any semblance of service.   Additionally, institutional care for individuals with developmental disabilities is not on the list and, I suspect, protected from cuts.  It is truly unfortunate that institutions take up a huge percentage of the budget for this high cost of service that could be performed in the community for far less money.  But this is a topic for future blogs.
$2.2 to $3 billion.  Unfortunately this isn’t a small hole to step out of and the state legislature will need to craft a funding package to add more revenue.  I hate to be the bearer of bad news on tax increases but we can’t possibly cut $2.2 to $3 billion out of the budget.  The only place with substantial enough budgets to target are Higher Ed (which the legislature has looted the last couple of biennial budget cycles) and DSHS programs.  Programs within DSHS are so decimated, and the need so great, it leads one to wonder – why have any programs for needy populations?
I truly believe we will need to address the revenue side of the ledger which is unfortunate because no one likes higher taxes.  Again I am hearing talk of closing loopholes – I just don’t believe a $3 billion loophole exists. I don’t know what the answer is, all I know is that to eliminate already struggling community programs will be devastating to the most vulnerable people in our communities.
Chart showing shortfall: